YES, I finally got to workout with Shaun T!! This past weekend I went on a road trip down to Columbus, OH with a group of friends to workout with the creator of Insanity himself!

It’s funny, when you follow a home workout program and press play everyday, after a while you pretty much know what to expect. You have your favorite one-liners and also those moments when you start to cringe because you know what’s coming next. For example, one of the first things I noticed when I started Insanity was that Shaun T. often likes to refer to himself in the third person. A bit odd at first, but just like Tony Horton he started to grow on me after a while. 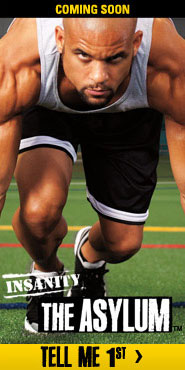 You know, “Shaun T’s startin’ to sweat” or “This is the time when Shaun T. needs to take a break…” And then at the very end of one workout when everyone is cooling down he yells at poor Josh for stretching incorrectly! And then there’s my favorite: “I’m so tired I don’t know the name of my moves.”

So, when I found out that I was doing a LIVE workout with Shaun T. I began to wonder…Was this going to be a different kind of Shaun T than the one I was used to??

Well, I’ll tell you that in real life Shaun T. is as impressive as his six-pack. He zig-zagged through the crowd of 300 or so people during our live workout (which consisted of a mish-mash of Insanity exercises) and the whole time I couldn’t decide if I wanted him to walk by me or not! LOL When he says, “If I’m in the room you better work harder.” He means it!! Even so, he seems like a very sweet, genuine person and is VERY good at what he does!

Before the workout he did a 30 minute Q&A session which was pretty informative. Here’s some highlights and quotes:

1. What he eats for breakfast: eight egg whites with avocado, half a cantaloupe, and two pieces of whole-wheat toast. Three times a week he has banana-nut whole-wheat pancakes (made from scratch). Otherwise, some staples of his diet include salmon, veggies, sweet potatoes, and lots of chicken. He’s not a huge fan of salad but when he orders salad he always asks for double-the-meat on top. He also likes Peanut M&Ms 🙂 and reminds us that at the end of the day it all comes down to portion control.

2. He says “I don’t have a diet plan, I have a lifestyle plan. I believe you go ON a diet to go OFF a diet. Because everyone who says “I’m gonna go on a diet” I see them a few weeks later and I ask, “So howz that diet goin?” and they’re like, “Well, you know…..”

3. His advice for anyone starting out is to GO SLOW. He says, “I would rather you eat ONE healthy meal a day and eat pizza for the rest of the day than COMPLETELY stopping the way you eat becuase you’re just gonna get bored and it’s just not normal. To completely change the way you eat is the craziest thing. For the first week, just eat ONE healthy a meal a day. Breakfast is good, because once you start the day right it helps you carry it through. Just challenge yourself to eat one healthy meal per day. Even though you may still be eating “fun foods”, over time more of the choices that you make will be healthy.”

4. He works out with kettlebells and would consider doing a KB video if BB asked him to. YAY! But usually he prefers to use his body weight for the majority of his workouts.

5. If we’re lucky Asylum will be released by the end of the March. Apparently 30 days lasts longer on the Beachbody calendar!

Here’s a couple snippets from the Q&A session:

What Does Shaun T. Eat?