The Federalist Papers (collectively known as “The Federalist”) are a group of 85 newspaper articles that were written anonymously by Alexander Hamilton, James Madison, and John Jay promoting the ratification (legal and formal approval) of the U.S. Constitution. The first article in the series appeared in New York newspapers October 27, 1787 and was addressed, “To the People of the State of New York.” At the height of the series, three or four new essays were published every week. The last essay was published in August 1788. 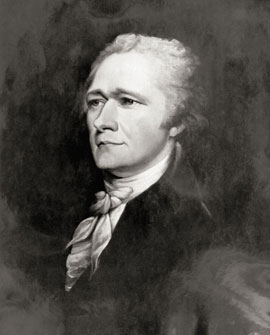 Alexander Hamilton was the mastermind
behind the Federalist Papers.

Thomas Jefferson described The Federalist in 1788 as “the best commentary on the principles of government which was ever written.” Some forty years later in 1825, Jefferson endorsed The Federalist as “an authority to which appeal is habitually made by all, and rarely declined or denied by any as evidence of the general opinion of those who framed, and of those who accepted the Constitution of the United States, on questions as to its genuine meaning.”

In 1961, political scientist Clinton Rossiter referred to The Federalist as “the most important work in political science that has ever been written, or is likely ever to be written, in the United States.”

When Alexander Hamilton learned that the state of New York was probably going to reject the Constitution, he rallied the support of John Jay (who later became the first chief justice of the Supreme Court) and James Madison (the “father of the Constitution”). In the Federalist Papers, the three men analyzed and explained just about every phrase of the Constitution so it could be better understood by the people. They wrote under the pen name PUBLIUS, which Hamilton chose as a reference to one of the founders and saviors of republican Rome–Publius Valerius Publicola.

For many years it was difficult to determine who wrote each of the articles, but today we know who wrote each of the essays except for a select few that were claimed by both Madison and Hamilton (nos. 55-58 and 62-63). Modern editions of the Federalist Papers indicate the author of each one.

The Federalists believed that the problems of the country in the 1780s stemmed from the weaknesses of the central government created by the previous constitution, the Articles of Confederation. While supporters of the proposed Constitution called themselves “Federalists”, some people get confused because “federalism” refers to a system of decentralized government (states rights). A more accurate name for the supporters of the new Constitution would have been “nationalists.” However, the “nationalist” label would have been a political liability in the 1780s. Since Hamilton beat them to it by claiming the good name of federalism for the new Constitution and its supporters, history knows his opponents only as the Anti-Federalists.

To Anti-Federalists, the central governing authority of a nation should be equal or inferior to, but not more powerful than, its sub-national states (state government). They believed the proposed Constitution threatened to lead the United States down an all-too-familiar road of political corruption. A detailed explanation of Anti-Federalist thought can be found in the Anti-Federalist Papers which supported the previous constitution known as the Articles of Confederation. As the years have come and gone, it seems that the fears of the Anti-Federalists have come true, and it’s only by reading these and other historic documents related to the Constitution that we can learn how to get our great country back on the right track.

If you’re still confused about the difference between the Federalists and Anti-Federalists, the following explanation from the Politically Incorrect Guide to the Constitution might help: “The Federalists generally were not federalist, but nationalist. Anti-federalists (they were actually federalist, and they called themselves Republicans) were not opposed to strengthening the federal government; they merely wanted to amend the Constitution before ratifying it.”

The Federalist Papers are in the public domain and are available for online reading here: http://federali.st/