Have you ever had a day that you wanted to live over and over again…kind of like Groundhog’s Day? That was my experience last weekend when Tony Horton came to Michigan and spent a day with us doing all the things that Tony Horton loves to do: workout, give a pep-talk, and mingle with his fitness peeps.

NOTE: the images in this post were provided by myself, Jeffrey Armbruster, and Jeff Gamet. 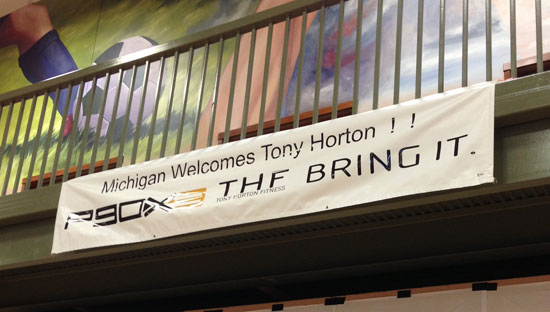 This was his first-ever visit to Michigan (yay!) and the event took place at the Freeland Sports Zone on Saturday, June 7, 2014. There was probably around 250 of us that attended, but I’m not sure of the exact number!

Here’s a quick little video snippet that was on the news:

The morning started with a kick-butting (literally!) workout that last for about 60 minutes. It was divided into two sessions and he gave us a generous 2-minute break in the middle of the sessions. 😛 The first session consisted of the MMX workout routine from his P90X3 program…basically a bunch of mixed martial arts exercises! I’m pretty uncoordinated when it comes to MMA but it’s still fun! The second session was based on his Warrior workout, which is more my speed. It consists of a lot of body weight exercises and is more of a total body workout based on Tony’s 10+ years of working with the U.S. Armed Forces. Good stuff!!! Both my husband and I worked up a major sweat! 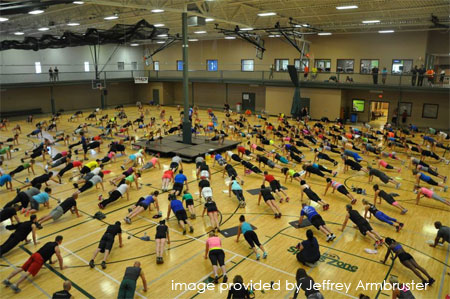 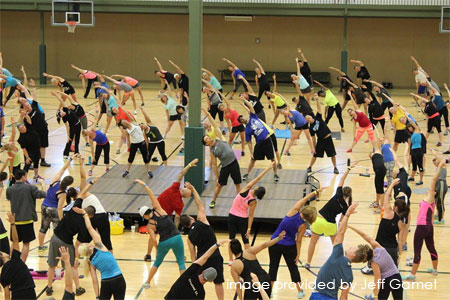 After the workout we were given a little bit of a break to eat snacks and get ourselves together. Luckily I remembered to pack some extra clothes so I didn’t have to sit around for the rest of the day in sweaty workout attire. (#notmyfirstrodeo) Then we all gathered around the gym floor and listened to Tony talk about some of the principles or “laws” in his new book The Big Picture.

No, we didn’t get any chairs but I actually thought it was kinda fun and cozy with all of us sitting on the floor. It reminded me of my days in elementary school when we would all sit in a circle and listen to the teacher tell a story. He talked for an hour, and I’m sure if he wasn’t on a schedule he would have talked for a lot longer than that. 🙂 I was actually pretty impressed that Jeffery Armbruster, event organizer and super-cool guy, was able to keep Tony on schedule! 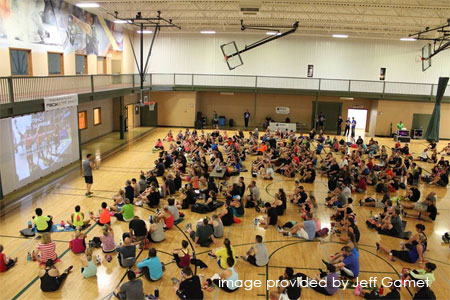 Here are the 11 laws from his book that he described in detail during his pep-talk:

11 Laws That Will Change Your Life

1. Do Your Best and Forget the Rest
2. Find Your Purpose
3. Have a Plan
4. Variety is the Spice of…Everything
5. Consistency Reigns Supreme
6. Crank Up the Intensity
7. Love It or Leave It
8. Get Real
9. Find a Balance
10. Stay Flexible
11. The Three R’s: Recharge, Recover, Relax

Tony Horton really inspires me because he is a stutterer too! He obviously has done some major work to overcome it, and I would love to pick his brain about it sometime. He talked about how when he was young he became a mime artist because it provided an escape from his speech impediment. I totally get that! I did the same thing with writing.

In addition to sharing some of the highlights from his book, Tony shared some personal stories including how he was introduced to Carl Daikeler (the CEO of Beachbody) which was kinda cool and something that I had never heard before.

Tony was reading a personal development book, and one of the assignments in the book was to think about someone who you were in a conflict with, and to do something nice for them. Tony thought about this guy who worked out in his gym. He always avoided him because he thought he was kind of a jerk. So the next day Tony walked up to him and introduced himself. They struck up a nice conversation and the guy told Tony there was a guy that he should meet, and guess who that guy was? Carl Daikeler!

I think it’s totally crazy that the future of millions and millions and millions of people (myself included) hinged on the fact that Tony Horton followed through on the homework assignment in a personal development book. How many times does that continue to happen, or worse…NOT happen, every single day?!?

I mean seriously…if Tony decided to NOT step outside his comfort zone and start that conversation that day would I have found another 90 day workout program to change my life? Would I be sitting here enjoying the freedom and lifestyle that comes along with being a full-time Beachbody coach? Probably not! And I’m just ONE person!

IT TOTALLY BLOWS MY MIND!!!

For those of you that don’t know my story, before P90X I was totally NOT interested in health and fitness. But one day I decided to get my butt in gear and for whatever crazy reason I decided to do P90X. When I first started the program I was like, “Who is this crazy guy? He’s kind of weird. How am I supposed to listen to him for 90 days??” And then again, for whatever crazy reason, after a couple of weeks I got totally sucked in. To this day, Tony is the only trainer who has kept my attention for 90 days. I think it’s because I can identify with his awkward sense of humor. Even now, I can’t say that I LOVE working out, but Tony makes it fun and he keeps me on the right path!!

I’ve “met” Tony three times now, but seriously…how do you explain everything you need to say when you only have like, 30 seconds to talk to a person?! LOL I’m sure this happens a lot to other people who have the opportunity to meet someone “famous” who has changed their life in a MAJOR way. Sometimes all you can do is smile, say THANK YOU and hope they “get it!” It’s even harder when you’re a shy person like me!

The Meet and Greet

But anyway, that brings me to the major highlight of the day…all of us were given the opportunity to have our picture taken with Tony and get an autograph. Super fun!! I got my picture taken with him once during the 2012 Beachbody Success Club trip in Atlantis, and 3 months ago on the SS Beachbody cruise. But for some reason during this event I think we made the best connection!

Like always, we were given strict instructions that we only had 30 seconds to get our picture and autograph, and not to hold up the line. This is hard for Tony too, because if he could, he would chat it up with each and every person and we would all be there waiting until the wee hours of the morning!

While my husband and I were waiting in line I was trying to think of a way to tell Tony we have the same birthday in a way that wouldn’t sound creepy or awkward. I didn’t come up with anything other than, “Hi Tony! We have the same birthday! Will you be my birthday buddy?” and that’s just SO not me. So I’ll guess that will have to wait until our next encounter…

When it was my turn I walked up to him and said, “Hi Tony! I would love it if you would sign my book!” He said, “Sure! What’s your name?” Sometimes I block on my name, especially when I’m nervous and know the question is coming, but a miracle occurred and I was able to blurt out “Amanda!” like a champ. Then something kinda weird happened. I was watching him write my name and he stopped on the M and said, “Oh! am I doing this right? How do you spell it? A-M…?” My mind went blank for a moment as I tried to process how many A’s were in there and said, “A-N…” But Tony looked kinda confused and still wasn’t writing. So I started over, “A-M” and then he said, “A-N?” LOL But yeah, eventually we figured it out but it was quite the process!!

After all that silliness, I started moving closer to him for the picture and as he put his arm around me he said, “Get in here woman…” in a deep voice that was both very sweet and assertive at the same time. I have to say, it really caught me off guard and made me blush! Who knows, maybe he says that to all the ladies, but it made my heart go pitter-patter and I was pretty much speechless after that! 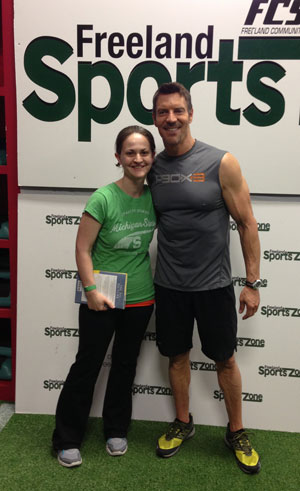 My husband got his picture taken too…his shirt says, “I am Here. What are your other two wishes?” and Tony thought it was pretty funny. 🙂 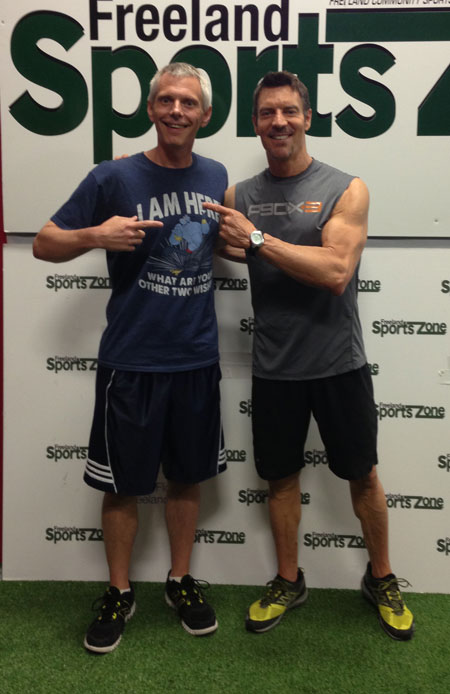 After that we signed our names along with everybody else on the WELCOME banner. I wrote, “Tony! Thnx for helping me change my life! 🙂 Amanda K. Jones”

That pretty much sums it all up in a few words, right?!?

All in all, it was a great day that I got to share with some GREAT people!

And the next time I meet Tony, I WILL find a way to tell him that we are birthday buddies! haha 🙂

Have you ever had the chance to meet someone famous who changed your life? How did it go? I would love to hear about it! Tell me in the comments! If not, who is someone that you would like to meet someday?