In this post you will see a picture of what has occupied the majority of my time for the past 8 weeks!! I want you to meet Libby, a little Maltese puppy I brought home from the clinic where I work as a licensed veterinary technician. And I’m not exaggerating when I say little…the pic above is the day I brought her home and she weighed 1 pound and 11 ounces.

That’s less than a sack of potatoes! 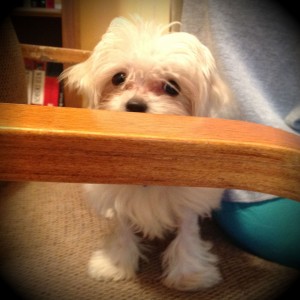 It’s a really long story and I won’t go into a lot of details here…but Libby was basically separated from her mom and littermates way too soon. Unfortunately this is common with irresponsible breeders who want to get money for their puppies as soon as possible.

She ended up at our hospital because she wasn’t eating at the pet store that was trying to sell her and she became very sick. She also developed an upper respiratory infection that turned into pneumonia. You can see from the picture that both of her legs were shaved where we had to place IV catheters to help keep her hydrated and nourished.

Personally, I don’t like the fact that my clinic has a working contract with this particular pet store but my job is to take care of animals no matter where they come from. It’s not their fault. I wasn’t going to let Libby go back to that breeder so I gave the pet store whatever amount of money they wanted so I could take her home. And that’s what I did!

We take care of a lot of sick puppies but there seemed to be something special about Libby (at the clinic we called her PUFF–all the puppies get a nickname). The teeny-tiny toy breed dogs are typically NOT my favorite, but I really liked this PUFF! She let us do whatever we needed to do to take care of her (so many pokes and pills) and never complained. When all the other dogs and puppies in the clinic were barking up a storm Libby would just sit quietly in her cage and lift up her little front paw to say HI whenever you walked by her cage. She is a rough-and-tumble little tomboy and who knows…maybe her personality reminded me of myself just a little bit?!

Of course as soon as I brought her home she started eating like a champ and her coat is starting to come in nicely. And now she weighs a whopping 4 pounds!! She is starting to settle in and adapt to the routine in our household. I heard one of my friends say once that as soon as she gave birth to her first child her brain fell out…well, that’s kinda how I felt when I brought Libby home!

I pretty much focused all my energy into nursing this 2 pound creature back to health and forgot about everything else! But we are all starting to fall back into our normal routines now and have ALMOST gotten the housetraining under control but I have a feeling that might take a while longer! Small breed puppies that come from puppy mills and/or pet stores are notoriously hard to housetrain because they’ve spent so much time in a cage where they are forced to soil their personal space.

It took my husband and I forever to come up with a name…I was so used to calling her PUFF but we finally settled on Libby which is short for Liberty Belle. She is just a little bit broken but was liberated in just the nick of time!

Anyway, I know none of that has anything to do with health and fitness, but I though you might like to hear the story. 🙂