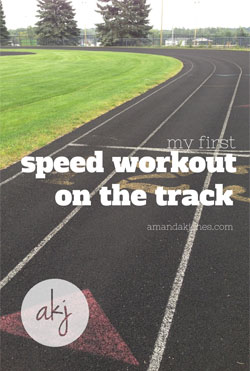 Today I did my first speed workout on a track. It seems odd saying that after almost 4 YEARS of calling myself a “runner”. In fact, it’s almost EMBARASSING!! What’s even more bizarre is that as a RRCA certified running coach I KNOW how important it is to do speed intervals if you want to become a faster runner.

Last year when I focused on endurance/distance I lost a lot of speed. It happens. I did my first full marathon in October 2013 and then the WDW Dopey Challenge (5K, 10K, Half Marathon, Marathon on four consecutive days) in January 2014. If you look at my Athlinks profile you can see how my pace took a nose dive!

We all have different goals and seasons when it comes to running. Last year my main focus was to survive running 48.6 miles in 4 days. Now my focus has shifted back to my goal of running a half marathon in less than 2 hours.

It took me a while to embrace this goal again…mostly because I know it’s going to take some work. It will most likely take me at least 2 years of focused effort to make this happen. Or maybe I’m giving the sub 2 hour half marathon too much respect? Well, no matter what happens I will definitely become a better runner and a better person in the process!

In order to run a half marathon in 2 hours or less you need to run 13.1 miles with an average pace of 9:09 or faster. Sounds easy enough right?!? But today as I did my speed workout I felt like I was pushing it to the MAX during those 1/2 mile intervals! I’d look down at my watch and it was typically in the range of 9:10-9:30. UGH!! BUT that’s me NOW and I know from here I can only get better.

I plan on blogging along this journey to help me keep track of my workouts and my progress. I’ll tag these posts as #sub2half.

And just in case you were wondering…

Total Half Marathons completed so far: 8

You need to introduce yourself to speedwork the same way you introduce yourself to running…WITH CARE! During my research I discovered the book Run Less Run Faster. I think the program has some good fundamentals so that’s the overall plan I’m going to follow. However, since my next half-marathon is only a couple weeks away I need to set a goal race farther in the future so I can officially follow the plan from start to finish.

In the meantime I’m going to take some of the basic principles from the program and apply them as best as I can to the races I have coming up this fall. It will also give me a chance to experiment with different types of speed intervals and cross training before I dive in. I’ve got my eyes set on the Glass City Half Marathon in Toledo, OH which would put me at an official start date of Jan. 4, 2015 for the 16-week program. Sounds good!

The book explains the 3PLUS2 program which basically means you run three times a week and then do cross training workouts twice a week. However, their definition of cross-training is very specific to running. In other words, the workout needs to mimic running form and improve your cardio endurance. Their recommended types of running-specific cross training include cycling, swimming, deep-water running, and rowing.

My plan is cycling (indoor) and then I’ll probably add 2-3 days of yoga/stretching/PiYO and strength training workouts, and 1 day of HIIT just to keep things interesting.

The first thing you need to do is find a 5K race time that represents your current fitness level and then use that time to follow their plan which is outlined in the book. Since I don’t have a current 5K pace I had to head to the track and figure it out!

Their prescribed plan for someone like me who has done ZERO speedwork up to this point:

So basically, you do a brief warmup (I did one lap around the track at a fairly easy pace although a full mile is probably a better idea) and then do two laps at a fast pace followed by one lap at a slower pace. And you repeat this process 4 times. The goal is to get a general idea of how fast you can go for 800 meters when you push yourself.

I changed things up a bit. First because the 800 intervals were killing me, and second because I was a little scared of a storm that was coming! So after my warm-up this is what I did instead:

And then I repeated that 3 times for a total of 3 miles.

Next week the goal is to do 4 x 800s! I think I’ll also have a better idea of how to pace myself.

These were my results:

The splits on my watch are set for 1 mile so unfortunately I have no idea what my times were for the 800s (that’s kind of good to know!) so I’ll have to change that for next time. But I thought it was interesting to see my average pace for each mile. I’m also kinda impressed that my last interval was faster than the first. And even though it practically killed me I’m pretty pleased with the results! I just need to increase my endurance at that speed. #easiersaidthandone

I really look forward to experimenting with more speed workouts in the future and watching my pace improve!