But I really can’t blame them for saying that, because it’s exactly what I used to think too! In fact, I had really good results with P90X the first time I did it and even though I always kept the idea of becoming a coach in the back of my mind, I would keep telling myself that “I could never be one of those MLM people!” My opinion was based on things that I heard other people say about MLM (multi-level marketing) and network marketing.

It wasn’t until I started educating myself and researching the Beachbody coaching opportunity on my own that I began to think a little differently about it. In the end I came to the conclusion that the only thing stopping me from becoming a coach was my own fear that I might actually be successful at it. I know that probably sounds weird, but it’s the truth. So I took a leap of faith and pressed the BECOME A COACH button. And now, over a year later my only regret is that I didn’t do it sooner!

So here’s the thing: 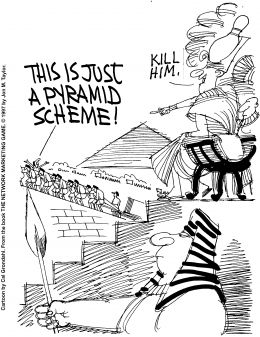 A pyramid scheme (which is illegal BTW!) is where you make money from simply getting people to join your organization. That is definitely NOT the case with Beachbody coaching. You can have people joining your team all day and night and never make a dime if you don’t invest time in THEM and helping THEM to become successful. The way this works, if you don’t help others become successful physically and financially you make nothing! You make a commission on your sales (25%) and you also make team bonuses based on the productivity of your team (typically anywhere from $14-$18 per 300 volume points produced).

If your team isn’t successful because you’re more concerned with you’re OWN success, then you won’t earn team bonuses. I think that makes perfect sense because you get out of it what you put in. Beachbody has carefully designed the bonus structure to be TRULY beneficial only to those who help others. It doesn’t matter WHERE you are, how far down, or when you join. You can make more than the person above you who joined 4 years ago and is “at the top”. But only if you have done more for others and work hard.

With the way Beachbody has it set up, EVERYONE is in at the “ground floor”. I didn’t join (and my two upline sponsors didn’t join) when this program was originally launched by Beachbody, yet we’re making more than many who did join right when it first started. But it’s only because of the work that we’ve put into it.

In almost ALL traditional businesses, companies and organizations you DO have to be at the top and even at the top many executives don’t have this type of earnings potential, not to mention the healthy lifestyle and flexible hours! I personally love that this is ALL based on fitness and a healthier lifestyle for yourself and others. This business is NOT about soap, candles, makeup, travel, kitchen gadgets, etc. This business is about getting people healthy and TRANSFORMING them from the inside-out. That’s powerful stuff!

I know this is getting REALLY long, but here’s the really important part:

If the Beachbody coaching opportunity is a pyramid scheme than so is every other “day job” that exists in corporate America!!

Seriously! Is it possible for YOU to ever earn more money than the CEO of the company where you currently work? Um….probably not!! As a Beachbody coach YOU are the only one in charge of how much money you can earn and you can easily make more than the people above you (but only if you work hard at it)!

Last year at my full-time job I got a $0.15 raise. Whoopee!! In retrospect, maybe I should have put in a little bit more effort? But guess what….I still would have gotten the same raise. Sadly, that’s how corporate America works these days. Seriously, how motivating is that? It’s just sad! But when you’re in charge of your own network marketing business the harder you work the more money you get paid. Isn’t that the way it’s SUPPOSED to work?

I had one person tell me he wasn’t interested in becoming a coach because he “already had a real job.” I respect his (rather misguided) opinion but really, I think that’s kinda funny! Did you know there’s a Beachbody coach that’s considering selling his dental practice so he can work on his Beachbody business full-time? What if he had said, “Sorry, I already have a real job!”?

Think about this for just a moment, if you had the opportunity to make more money than doctors, lawyers, and dentists who have all gone to college for 8 years or longer, wouldn’t you be willing to invest a couple years of your life to learn the ins and outs of a successful network marketing company? I guess the real question is, can you afford NOT to these days?

In his book, Your First Year in Network Marketing, Mark Yarnell writes, “By age twenty-five, most people have an idea of what profession they’ll enter, anything from a fishing guide to a surgeon. But forty years later, out of a typical 100 people, 5 are still working, 36 are dead, 54 are dead broke (or at least earning far less than when they were employed), 4 are well off, and 1 person is wealthy…most of us go back and forth from home to work, back and forth, back and forth, like a silly, caged lion…and yet at the end of that time only 1 out of 100 persons has something to show for it! In stark contrast…work diligently for one MLM company for four years, build an income based on the honest movement of products or services, and you’re set for life.”

I know there are some people who are skeptical of this type of business-model. But I think the main reason is because a lot of people get into this type of business thinking they can make a lot of money quickly by doing only a little bit of work. That is definitely not the case with Beachbody coaching or any other type of network marketing company.

All I know is that the only reason why I finally decided to become a coach in the first place was because I believe in the products 100% (because I’ve experienced it for myself). And now I also believe in the business 100% (because I’ve experienced it for myself). I can’t believe in the products or the business for you. That’s something you’ll have to experience for yourself. But really, once you get it in your head and your heart that both are capable of changing your life, great things will start to happen!

Here’s another tidbit to think about it:

As many as 95% of those people who remain in the network marketing industry for ten years or longer reach the highest pay levels in their respective companies.

If you keep doing what you’re doing, where will you be ten years from now? I can tell you where I won’t be and that’s punching the clock for “the man”!!

Wow, if you read this entire saga of an article then you must be doing some serious research on becoming a coach! Are you still struggling with it? Got more questions? Think I’m just drinking the Kool-Aid? Feel free to use my contact form and tell me all about it!