I love peanut butter!! And unless you have an allergy I would guess that you love it too! But have you seen all the different types of peanut butter on the market? Why so many choices? And which peanut butter is the best choice for you?

First, let’s be clear. The point of this article is not to bash any particular product or for me to tell you what to eat. I’m simply here to give you the facts so that you can make the best choices for yourself based on your goals and personal preference.

Why eat peanut butter? Well, peanut butter contains a lot of vitamins and minerals as well as some protein and of course, fat. But let’s face it, not many of us eat peanut butter for the health benefits, we eat it because it tastes so gosh darn good!! If you are just going by taste choosing a brand of peanut butter probably isn’t going to be very hard. But what if you have some other goals in mind like losing weight, eating less processed food, reducing added sugar etc.? 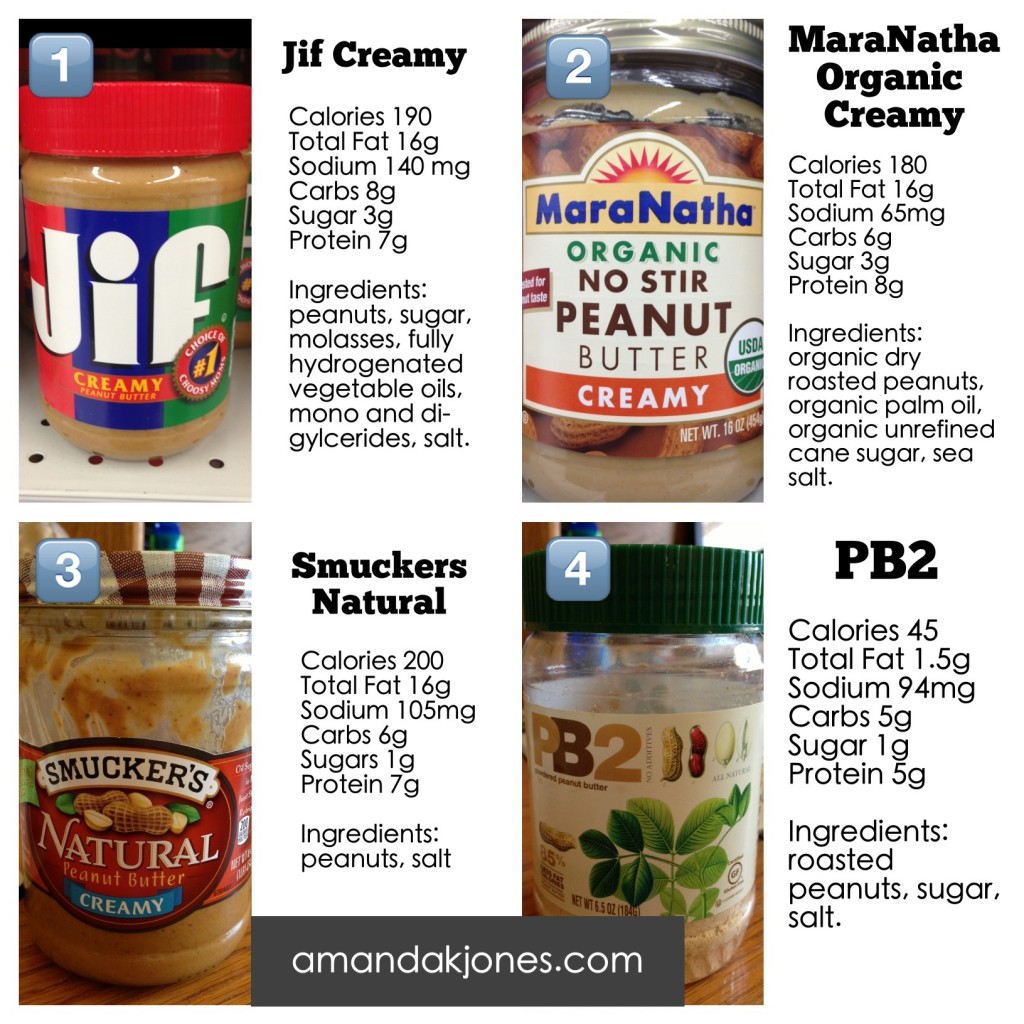 Well, typically a good place to start is the Nutrition Facts label. You can often learn a lot here! In fact, this is when I first became intrigued by the differences among peanut butter. When I started tracking my nutrition (calories, macronutrients, etc.) I noticed that the nutrition facts for Jif Creamy (our go-to peanut butter for as long as I can remember) was almost exactly the same as the nutrition facts for Smucker’s Natural Creamy. You would think that the “natural” brand would be just a wee bit different don’t you think? Granted, it is lower in sugar but what about the fat?

Here’s what I discovered: naturally occurring peanut oil is liquid at room temperature so there is a separation of oil from the ground-up nuts. That’s why when you buy a jar of “natural” peanut butter you have to stir the stuff like crazy and then store it in the frig. In other peanut butters, some of the naturally occurring peanut oil has been replaced with hydrogenated fat which is solid at room temperature (think Crisco) and is easier to spread. So while the nutrient profiles can look very similar the difference is in the ingredients.

Basically, hydrogenation is not a natural thing. It’s a man-made process that extends the shelf life of a product. It turns oils that are liquid at room temperature into a solid and makes them more stable. And in the case of peanut butter, easier to spread. There’s evidence to show that man-made fats may play a role in both cancer and heart disease. If that’s a concern you may want to avoid foods whose ingredients contain partially hydrogentated or hydrogenated oils. Some say that the amount of hydrogenated oil that is added to regular peanut butter is so neglible that it doesn’t make much of a difference. But that’s up to you to decide!

You may also notice that some “natural” brands of peanut butter contain simply peanuts and salt, while others include palm oil or some other type of oil to to keep the peanut butter from seperating and easier to spread. To tiptoe around the whole issue of trans fat and hydrogenated oils, some brands have been adding palm oil to their peanut butter. Personally, I think this is considered cheating as far as “natural” peanut butter is concerned. Besides that, palm oil is extremely high in saturated fat. There is also a lot of controversy over palm oil and its effect on the environment. So again, weighing the trade-off between eating “natural” peanut butter that is both tasty and easier to spread is a decision you need to make for yourself.

BTW, have you noticed that “natural” can be a rather vague term? My definition of natural might be different than yours. And chances are, what we both think is going to be different than the food companies too! To me, “natural” means “nothing else added” or “as is” or “as found in nature.” So when it comes to peanut butter I expect natural to be just that: peanuts. As you can see from the many different labels of “natural” peanut that is NOT always the case!

OK, so what about this PB2 stuff? PB2 is a powdered form of peanut butter that has had the fats pressed out to reduce both the calorie and fat content. Is less calories and fat better? It depends on who you ask! When it comes to PB2 many of the essential vitamins and minerals and other benefits that make peanut butter “healthy” have been pressed out as well. PB2 also has added salt and sugar to make it a wee bit tastier since the fat (and flavor) has been removed.

Would you rather have the “healthy” fats associated with eating whole peanuts or a little bit of added sugar and salt? Again, that’s a decision YOU need to make! Are you eating peanut butter for the taste or the health benefits? Maybe you’re using peanut butter as part of a post-workout snack and the added sugar of PB2 isn’t a problem because you need to replenish glycogen you lost during exercise. Just don’t blindly eat PB2 because you’ve heard it’s “clean” or “natural” or “healthy.” This product is processed. 🙂 I also think it’s a little odd that they have “NO ADDITIVES” written on the front label. Ummmm, peanuts don’t contain sugar! So how did it get in the product??

Personally I use PB2 a lot for baking when I want the taste of peanut butter but when I want to keep the recipe low-fat. It’s also a lot easier to measure! I don’t eat PB2 because I think it’s a health food, I eat it for convenience but other people may feel different.

In a nutshell here is what I hope you learned from this article:

1. Ignore claims made on the front of food labels, especially things like “natural” because food companies like to make up their own rules and definitions.
2. Just because two foods have the same nutrition facts (calories, fat, carbs, protein, etc.) that doesn’t mean they are the same. CHECK THE INGREDIENTS if you really want to make a fair comparison.

This goes for peanut butter as well as any other type of food!

So what is your favorite brand of peanut butter and why? I would love to hear your thoughts!