NOTE: This is NOT a sponsored post or paid review.

Is it just me or do Marshalls and TJMaxx always have the most random health and fitness items?? When I was there the other day I spotted this contraption. It’s sort of like a compression sleeve disguised as a carrier for your iPhone.

Or is it an iPhone carrier disguised as a compression sleeve?? It’s hard to say. 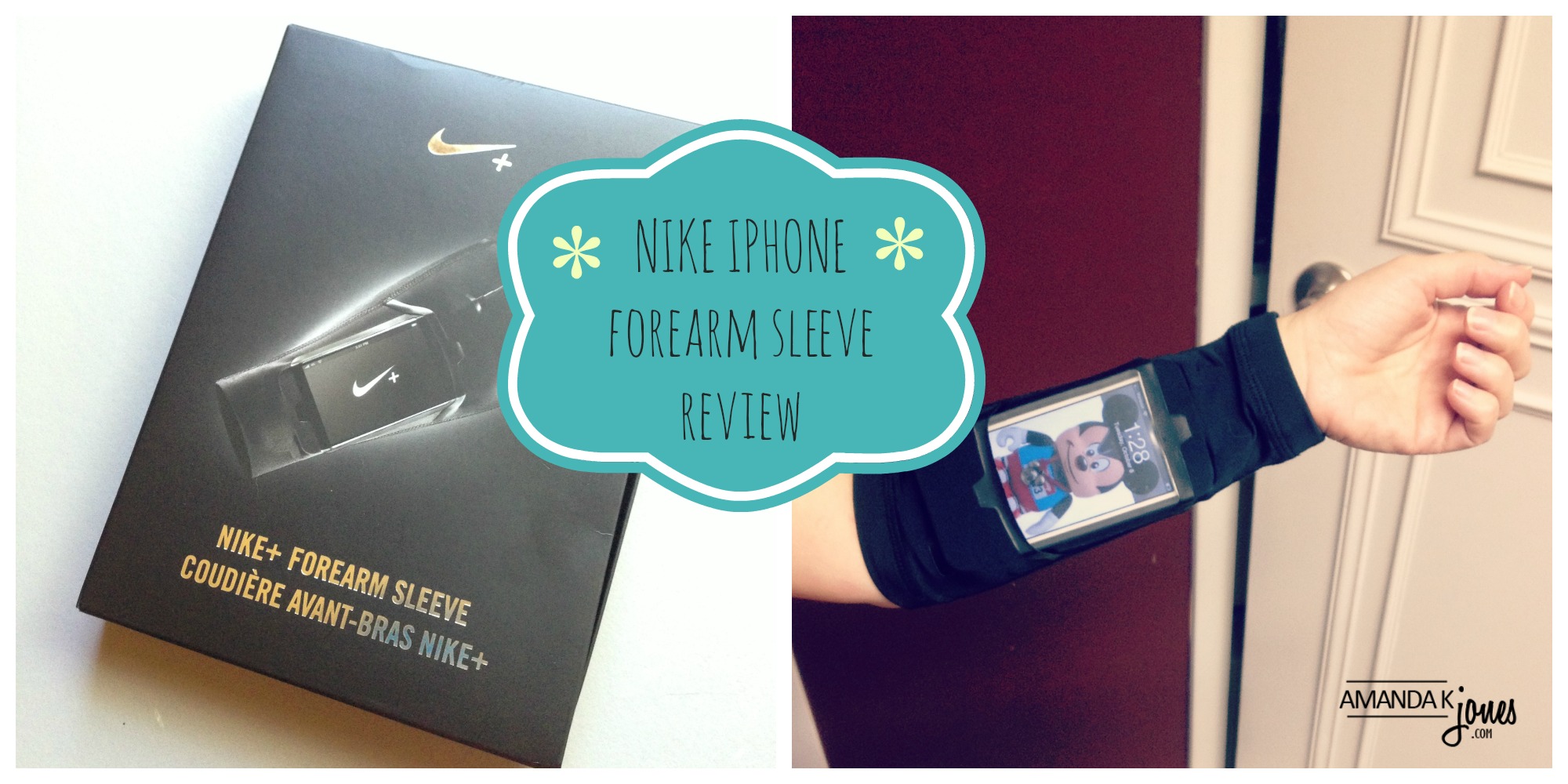 The suggested retail price was $30 and TJMaxx had it marked at $12.99. They also had a sleeve that covered both the forearm and upper arm but I liked this option better.

The back of the box says:

As much I hate carrying my phone when I go running I’ll admit it’s probably a good idea. I mean seriously…if I had a dollar for every time my mom asks if I carry my phone when I run I could buy a new pair of running shoes. I’m one of those weird people who don’t listen to music or anything else when I run. I just like to unplug from everything and give my brain a break for a while. If I do bust out the tunes it’s only to get me through the last few miles of a very long run. So anything that makes it easier and more convenient for me to carry my phone while running would be a good thing. Otherwise I would just assume leave it at home cuz I don’t really need  it (unless I happen to trip and fall in a ditch).

This device looked interesting to me because typically when I bring my phone on runs I have to bring my fuel belt which is a bit overkill when I do anything less than 10 miles. But it’s the only thing I have that has a pocket big enough to hold my cell phone other than a pair of capris I have that has a really big pocket. And I HATE those velcro-type gadgets that you wrap around your arm. 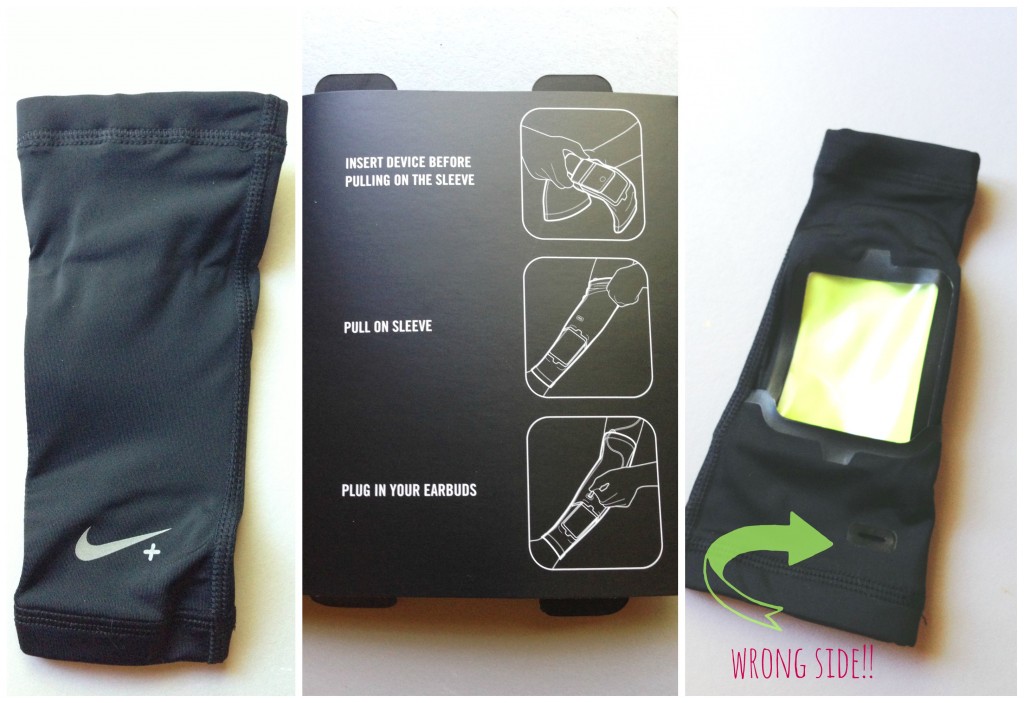 It took me a few minutes to figure out exactly how to squeeze my phone into the little pocket. I’m not sure if it matters here but I have an iPhone5. I think the 5 is slightly larger than earlier versions of the iPhone. I had a bit of a hard time squeezing it into the pocket. And then I realized it would probably fit better if I took off the cover I had on my phone, which it did. But I’m not sure how much I like the idea of taking off the cover.

If you have an Otterbox on your phone this device probably won’t be very convenient for you to use if you run a lot. Then again, if you do a lot of running with your phone you most likely don’t have an Otterbox. The cover I have on my phone is pretty thin and I was able to get it inside the pocket with some brute force while it was still on. But the sleeve wasn’t nearly as comfortable.

The first thing I noticed when I put it on my arm was that it was TIGHT. My box was marked S/P|M/M so I think that means small and you can tell from the picture that I’m not very beasty. But after putting it on and taking it off a few times it seemed to stretch out a bit.

For the picture above I wore the sleeve on the inside of my LEFT arm which is where it would need to be if I was using it for music or anything else during my run (since I’m right-handed). I was able to use different apps through the clear plastic screen that covers the phone. But since I just carry my phone for emergency purposes I wore it on the outside of my right arm during my 6-mile test run. But otherwise I’m pretty sure it was designed so your phone is on the inside of your arm (that’s how they display it in the directions).

One thing I thought was kinda weird is that the slot for your headphones is on the wrong side of the sleeve. So when you’re looking at your phone the slot is on the right side of the sleeve instead of the left. I don’t know about other iPhones but on mine the headset plug is on the left side of the phone. It wouldn’t be so bad but there’s really not a lot of wiggle room once your phone is inside the pocket. I guess I’m surprised that they didn’t design that a little better. It’s not a show-stopper for me because I don’t use headphones but it would probably be kinda annoying for someone else unless you have a Bluetooth headset.

During the first couple miles of my 6-mile run I was very aware of this strange thing that I had on my arm. I was kinda worried that by the end of the 6 miles my arm would go numb but it turned it out OK. After a while I forgot about it until I started to get hot around mile 4 and I really wanted to just rip the whole thing off. I’m really not sure I would be able to tolerate it even during a short run in the summer heat.

If I had my choice I would much rather carry my phone in the pocket of my capris. But unfortunately I don’t have 5 pairs of capris that I can wear every day that I run. Something like this could definitely work for some of my shorter runs where I don’t want to carry my fuel belt. If I had paid $30 for this thing I probably would have been a little disappointed, but for $12.99 it’s a nice option to have.

Overall these are my thoughts:

The sleeve is a lightweight and less cumbersome way to carry your phone during a run vs. a fuel belt or arm band.
It’s easy to look down and glance at your phone while running.
You have almost full use of your phone and apps during your run.
It would be very easy to pack and travel with.
During races or events it will be nearly impossible for you to drop or lose your phone (since it’s pretty much cemented to your arm).
You look like Batman when you wear it.

Depending on the size of your cover you may need to take it off in order for your phone to fit inside the pocket.
The slot for the headphone jack is on the wrong side of the sleeve (at least for my phone).
Once your phone is inside the pocket don’t expect to get it out again until the end of your run.
It’s not really something you can use in cold weather unless you have a long-sleeve shirt or jacket that is big enough to go over the sleeve.
On a hot day it’s gonna drive you crazy.
You look like Batman when you wear it.

The major show-stopper for me is that in order for it to feel really comfortable I have to take the cover off my phone. But maybe I’ll get used to it. I’m going to try using it a few more times.

So do you think this is something that you’d like to try? And do you take your phone with you on EVERY run, or just the longer ones?