Today on Tuesdays on the Run hosted by Erika, Patty, and April we’re talking about our FIRST race. Wow, when I look back on my first race in September 2010 it seems like SUCH a long time ago! It also seems weird that I never wrote up a proper race recap from that day. You know, seeing as how it was my first race and all…but better late than never I guess!

Unfortunately I don’t have many photos to share from the event (I’m SO bad about taking pictures!!) but I’d still love to share some memories with you! 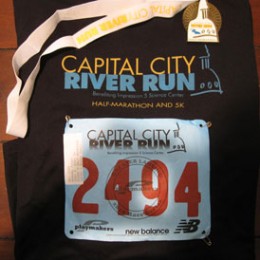 As a kid I was a soccer nut. I played every fall and spring from third grade until my senior year of high school. I was never really gifted as a soccer player or a runner, but on the field I was known for my breakaways and I almost always beat the other team to the ball. I guess what I’m trying to say is…for a really long time I didn’t see the point of running unless I had a soccer ball bouncing in front of my feet.

We all know that after high school strange things happen. Soccer became a memory and so did any kind of routine that required me to stay in shape. I graduated from college in 1998 and got married in 2000. During the next few years I had jobs that kept me somewhat active but I didn’t follow any kind of exercise routine.

Fast forward to 2009 and I just wasn’t feeling all that great about myself. I wasn’t extremely overweight or obese but you don’t have to be either one of those things to have a negative image of yourself. I knew I really wasn’t living up to my potential. There were many mornings when I got dressed in the dark so I didn’t have to look at myself in the mirror.

One thing led to another and I decided it was time to make a change. I decided to give running a try. Like a lot of newbie runners, I headed out the driveway at top speed. I made it probably 1/10 of a mile. So much for that idea!

Let’s try something else!

My husband had gotten really good results with the home workout program P90X and I certainly wasn’t going to workout in front of other people at the gym, so I started doing the DVDs. It was pretty fun and I blogged about my experience to help keep me accountable. Before I knew it the 90 days was over and I felt great! I decided to go “running” again just to see how much farther I could from the last time and I made it 3 miles without stopping! I was completely amazed!

For their first race a lot of people do a 5K or a 10K but at that moment I made the decision that I wanted to do a half-marathon. I started doing some research online and found a Hal Higdon training program that started at 3 miles. Perfect!! 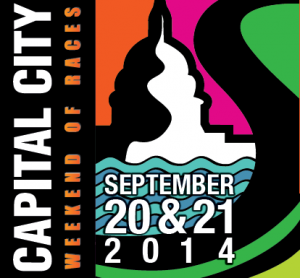 I heard a lot of good things about the Capital City River Run so I picked it for my first race. It was less than an hour drive away so I figured the logistics wouldn’t be too stressful or complicated. I started training in May and thought that the end of September was sooooo far away. But luckily I listened to some good advice I received from one of my running friends who told me that it was better to start training sooner rather than later. Originally I was going to follow the 12-week plan that I found, but I figured out a way to add an extra 6 weeks to the schedule.

Training during the summer was pretty awful, especially since we had really humid weather that year in Michigan. But I think it helps your performance on race day to train in not-so-pleasant temperatures, as long as you stay hydrated!

I can’t say that I followed any particular strategy for the race–my goal was simply to finish!

I didn’t know it at the time but a good pacer can make a HUGE difference for your race. Some of the other races I’ve done either didn’t have pacers at all, or the pacers in charge didn’t really do a good job of keeping you engaged in the race. After many races the 10:00 pirate pacers at the Capital City River Run are definitely my favorite!!

This worked out perfectly. The 10-minute pace group finished right on time at 2:11:05 and I was 3 minutes ahead. Three minutes doesn’t sound like a long time, but it is when you’re running!

My sister also ran in the half-marathon and we stayed together for the first 3 miles or so but eventually she started to pull ahead of me. The entire race I was distracted because I kept trying to look for her. I never saw her again until the finish line but she finished only 39 seconds in front of me! I think knowing that she was in front of me really motivated me to push harder!

The weather for the race was PERFECT. The morning was pretty chilly but once we got running it was nice. When the race was over my family was there to greet us and my other sister had made us chocolate chip cookies! They really hit the spot!

For my first race and first-ever half marathon I managed to record a very respectable time: 2:08:51. It remains my PR to this day and I’ve run quite a few more half marathons since then! 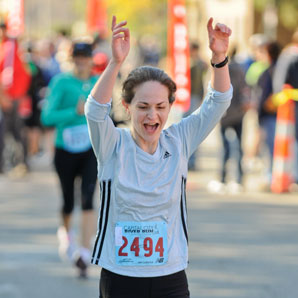 I think no matter what the outcome, your first race will always hold a very special place in your heart. The Capital City River Run is one of my favorite events and I make a point to do the half-marathon every year if it fits in my schedule. And who knows, maybe one of these times I’ll FINALLY beat my PR!!!

I’m so grateful that my first race ever was such a positive experience. What fond memories do you have from your first race?