I have to say, Meltdown by Thomas Woods is probably the first book about economics I’ve ever read. I really didn’t care too much for the subject in high school–probably because I figured it played no significant role in my life unless I decided to work on Wall Street or become an accountant. Well, that’s the impression I got from my teachers anyway. Too bad for me. I’m about 15 years late to the party. 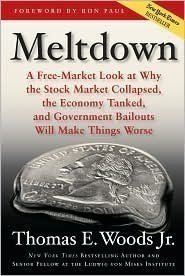 Another name for this book could have been “Why Everything You Know About U.S. Economic Policy is Wrong” or “Why Government and the Mainstream Media is Totally Clueless When it Comes to Economics.” Of course, “Meltdown” is easier to fit on the cover and makes for a nice catch phrase. The subtitle reads: “A Free Market Look at Why the Stock Market Collapsed, the Economy Tanked, and Government Bailouts Will Make Things Worse.” If you think that consumer spending drives the economy you need to read this book. Period.

If you’ve never heard of Ludwig von Mises or the Austrian theory of economics this book will introduce you to both and your life will be the better for it. You may even be like me and be so intrigued by old, croggy, and deceased economists you’ve never heard of that you want to read even more about what they have to say. And in case you didn’t already know, Thomas Woods and Ron Paul (who wrote the foreword) are besties. Put these two in a room together with Peter Schiff or Lew Rockwell and watch the current administration twitch.

One of my favorite quotes from the book is: “When you ask a question that sends respectable opinion into hysterics, that’s often a sign you’re on the right track.”

I love how Ron Paul makes everything sound so simple and Woods has a very similar writing style. In the forward Dr. Paul writes, “We can probably expect an avalanche of books in the coming months that purport to tell us what happened to the economy and what we should do about it. They’ll be dead wrong, and most of the advice they provide will be dreadful. You can count on that . . . The more we intervene and the more we prop up economic zombies, the worse off we’ll be. But the sooner we understand whas has happened, assess our economic situation honestly, and rebuild our economy on a sound foundation, the sooner our fortunes will be restored.”

As I write this blog post, Meltdown currently has 182 reviews on Amazon with an average customer review rating of 4.5 stars. About 83% of reviewers gave the book 5 stars. I found many of the reviews quite compelling, including those titled ‘The Most Important Debate in Our Lifetime’, ‘Buy a Second Copy to Throw at the TV’, and ‘The Fed’s Fingerprints Are All Over It’. Other comments include ‘Common Sense From an Uncommon Economist’, ‘Contains the Clearest Thinking on Our Current Economic Situation’, and of course the classic ‘Must Read’.

The theories of Keynesian economics (which are supported by President Obama along and 99.9% of Washington) seem to be gaining in popularity and this book serves up an educated and well-researched rebuttal to many of the remarks you’ll be sure to hear emerging from the media, politicians, and even gatherings at the water cooler in the coming days, weeks, and months.

Chapter 1: The Elephant in the Living Room introduces us to the Federal Reserve. Since its creation in 1913, the Federal Reserve has done everything in its power to intervene with the workings of the free market. As always, the free market gets blamed for the boom-bust cycle when it’s the Fed’s intervention into the economy that creates the problem. Woods includes a quote from Henry Hazlitt: “These artificial booms must end in a crisis and a slump, and . . . worse than the slump itself may be the public delusion that the slump has been caused, not by previous inflation, but by the inherent defects of ‘capitalism’.”

Chapter 3: The Great Wall Street Bailout addresses the mother of all bailouts. Simply put, there is no shortcut to creating wealth. There is no “monetary magic wand” and once again, Woods explains how the free market had nothing to do with it.

Chapter 4: How Government Causes the Boom-Bust Business Cycle introduces the Austrian theory of economics and compares it to our arch-nemesis, Keynesian economics. Simply put, the artificial low interest rates (via the Fed) provide the boom and government interventions prolong the coming of the bust. As Peter Schiff likes to say, “short term gain for long term pain.” Woods also points out that “the longer you hold on, the more it hurts.” In addition, he also explains the problems associated with public-works stimulus projects as well the recent dot com boom and the Japanese bust that lasted for 15 years thanks to Keynesian economics. Both Woods and Dr. Paul agree that a solid understanding of the Austrian business cycle theory of economics is the single most important piece of knowledge that Americans need to have right now. People are under the false impression that boom-bust cycles are normal. They’re not. It’s the result of a system in which government and the Federal Reserve manipulates the money supply and artificially pushes down interest rates.

Chapter 6: Money was probably one of my favorite chapters of the book. You’ve probably never asked yourself, “What is money?” but it’s actually a good thing to know! Especially since money has such a huge control over your life. I finally understand the weakness of a fiat currency (our current system) and the strength of a gold standard. Our current system makes it pretty easy for the government to bail out its friends–which is probably why it never comes under much scrutiny. The U.S. Dollar is so politically manipulated it almost makes you sick to your stomach.

Chapter 7: What Now? presents solutions to all the problems addressed by Woods throughout the book. Woods provides an excellent summary of why spending isn’t the answer and explains the difference between production and consumption.

Seriously, I’ve always been put off by economics but this book was really interesting. I plan on reading it a second time. There’s also a lot of information presented in the footnotes and I plan on reading a lot of the books Woods used as references when he wrote Meltdown. My hope is that you’ll read this book and encourage everyone else you to know to do the same. There’s never been a more critical time for the country to educate ourselves on these matters.

Like Thomas Jefferson said, “Educate and inform the whole mass of the people . . . they are the only sure reliance for the preservation of our liberty.”

You can read more about Meltdown by Thomas Woods on Amazon.