Ah yes…the Dopey Challenge. It seemed like such a distant goal when I signed up back in April 2013. I had nine months to plan and train. No problem! But then summer ended and it was like WHAM!! This is really happening isn’t it?!? 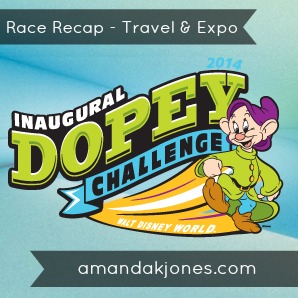 In case you didn’t know, the Dopey Challenge is a four day event that takes place at Disney World during Marathon Weekend in January.

This year (2014) was the first time for the 10K so it was an “inaugural” event. Historically, there was always the GOOFY Challenge which included the half and full marathon. But since the 10K was new this year, this was also the first year for the DOPEY Challenge.

This was my first RunDisney event, so per my usual routine, I decided to jump in with both feet. Ready…FIRE! AIM!

I can’t say that I’m a HUGE Disney fan, but each time I go it sucks me in a little bit more. I think it’s part of the Disney magic. The first time I went to Disney World was in March 2013 during a Beachbody trip with my husband (we were spoiled and stayed at the Beach Club resort), and I was like “Hey! This would be a great place to go running! I wonder if anyone else has had that idea?!?”

The next month I learned about the Dopey Challenge and without hesitation I said, SIGN ME UP!!

I had no idea that simply getting to the airport was going to be one of the most difficult parts of the challenge. The weekend before Dopey the entire mid-west experienced one of the worst winter storms we’ve had in a very long time. Here at Jones Park we got about 14 inches of snow, and airports everywhere were cancelling flights. Dopeys across the country were scrambling to find a way to the 5K starting line. After months and months of training and hundreds (thousands?) of dollars invested in our quest, there was definitely a lot of panicking going on. However, you can’t expect a little hiccup to get in the way of a group of a determined runners. For every panicked individual who posted pleas for help in my Dopey Challenge group on FB there was a group of people ready to pitch in and do anything to help a fellow Dopey get to Orlando and qualify for the 5K. The hashtag #noDopeyLeftBehind was born.

When I posted a picture of my road (which was impassable to cars at the time) and said that I might have to hike half a mile with my suitcase to get to a main road, a fellow Dopey made the suggestion: “Perhaps if you pulled your suitcase behind you on a sled that would make things easier?” Only a fellow Dopey would make such a suggestion as if it sounded completely reasonable, right?!?

I quickly became an expert at stalking the FlightStats.com website and tracking every Delta flight that went from Detroit Metro to Orlando airport for the three days leading up to Dopey. Based on my research a few Delta flights were delayed but none were cancelled. A lot of people weren’t so lucky though. In an attempt to arrive early, they scheduled their flights on Monday and Tuesday, which was during the worst of the weather…especially Monday. Our flight was on Wednesday, the same day as the Expo, and the day before the 5K. As if the snow wasn’t bad enough, there was also artic temperatures to deal with. Schools were closed Monday, Tuesday, and Wednesday.

By the time Wednesday morning came around I hadn’t left our house in over a week. Between being sick and the weather, I hadn’t gone running in almost two weeks. I was a little nervous about that but tried not to think about it too much. I had a decent amount of mileage built up during my training, and I had done my “mock Dopey” week only a few weeks ago. Thank goodness!!

A single track was plowed on our road, so on Wednesday morning we were able to make it to the airport. And thanks to my awesome husband for literally spending three days outside plowing our driveway so we could get out! I felt a huge sense of relief when I saw our plane sitting at the gate. I had managed to pack relatively light…one carry-on suitcase with wheels and a backpack. If I had it to do over again I would have packed less food…but I’m always paranoid about not having enough to eat when I travel. :-/

We landed with no delays in Orlando. It was quite interesting to see the Disney cast members wearing their parkas and winter gear. HA!! We arrived at the Art of Animation resort around noon and were pleased to learn that our room was ready for check-in so we didn’t have to leave our bags at the desk. We got a room with a courtyard view in the Little Mermaid Building #9 on the fourth floor. It’s pretty much the farthest away you can get from anything at the resort, but not a show stopper. The room was nothing fancy but definitely served it’s purpose during the week. My running buddy was kinda disappointed that the room didn’t have a coffee maker, but other than that it had everything we needed.

We dropped our bags in the room and decided to eat first even though we were both SUPER anxious to pick up our bibs and packets. The AofA has a huge dining selection and I honestly found it very overwhelming. It’s sort of a cafetaria style but the menu is always changing. My friend got a Meditarrean-style dish (I can’t remember the name of it but she thought it was good) and I got a chicken burger with cole slaw. It was a pretty decent meal.

It was just a short bus ride from the AofA resort to the ESPN Wide World of Sports Complex where the expo was taking place. Let me tell you, the expo was NUTS!! There are about 3 different buildings in the complex where activities are taking place. We had to go to the HP Field House to pick up our bibs, and then the majority of exhibitors were located in the Jostens Center. There were also some exhibitors located outside of Champion Stadium (where the Atlanta Braves play during spring training).

I’m not sure how it worked for other runners, but since my running friend and I were part of the Runners’ World Challenge we picked up everything we needed at the RW booth. They gave us our bibs (we wore one bib for the 5K and 10K, and another bib for the half and full), and all six race shirts, coupons for massage, bracelet to get into the breakfast and race retreat tent, card for Pasta in the Park, and a couple other things that I can’t remember right now. We did have to go to another booth to pick up our commerative pins (I got the marathon and Dopey pins).

After that we made a bee-line to the RunDisney merchandise. Both of us wanted the RunDisney Vinylmation and medal. Sadly though, I didn’t pick a Green and Purple (3 out of 10 are green and purple) and ended up with the more common yellow and blue. I was kind of disappointed in the selection of Dopey merchandise. There were some black jackets and grey women’s tops that sold out before we got there, but everything else they had was red. It seemed like instead of red the Dopey merchandise would be green and purple?? I was hoping to get a Dopey hoodie but apparently it wasn’t meant to be. I have too many hoodies anyway!

A lot of people were going ga-ga over the New Balance RunDisney shoes. They introduced a bunch of different styles this year. I liked the mens shoes better than the womens. There was a pink Minnie shoe and a blue Tink shoe. The Tink shoe was kinda cool but I didn’t like it enough to spend the money. I bought some Dopey decals, a hat, and some headbands. I also bought a FlipBelt which I anticipate using a lot. I used it during the 5K and the 10K and I LOVE IT.

Other than that we just walked around looking at the vendors. I got my picture taken with the Chiquita banana lady just so I could have a banana for breakfast the next morning. We also listened to some of the speakers which may or may not have been a good idea. I had a pretty good game plan going into Dopey but when the experts start talking and giving you advice it tends to make you second guess yourself. One expert said to drink mostly sports drinks during the races and then the next expert came on and said to drink mostly water. What?!? So my best advice for anyone is to always stick with what you do during training because you know what works best for YOU!!

After a day of traveling and milling around the expo we were pretty tired and decided to head back to the resort and get things in order for the 5K.

3AM is an early wake up call!