After our adventure at the expo we got back to the resort and got everything in order to prep for the 5K. I have to admit, when I packed my suitcase I really didn’t have any idea exactly what clothes I would be wearing for each race…I just made sure to pack all my favorite running gear!

The reason I didn’t have each day planned out to a ‘T’ was because I didn’t know what the weather was going to do each day. One year I heard the weather was freezing (well, according to Florida standards) and I heard another year was sweltering hot. So I really didn’t have any idea what to expect. I’ve learned pretty quickly that the weather in Florida is a lot like Michigan…UNPREDICTABLE! It changes fast so forget about checking the forecast a month or even a week before your trip…try the day before (and even that’s a stretch)! 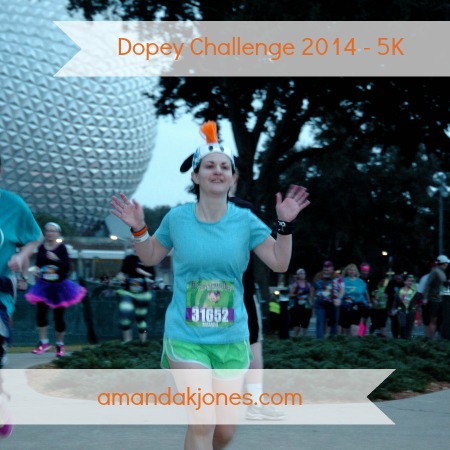 The year before when I visited WDW I picked up a couple of hats for my Dopey running buddy Carrie who totally gets into dressing up and costumes (me not so much). The one hat was a Goofy style, the other a Mickey style and they both had mohawks on top. We decided these would be good to wear during the 5K. I actually liked this hat quite a bit because it served a dual purpose as a bandana and kept my unruly thick and short hair out of my face.

We finally decided on our 5K apparel and didn’t have any problems falling asleep. I settled on a basic short-sleeve shirt with shorts and my Nike Flex Experience shoes (version 2).

I don’t remember what time we woke up for the 5K but it was early. When we checked into the resort we were given a bus schedule which listed all the times the buses would be traveling back and forth between the resort and the expo/staging area. Bus transportation for the 5K started at 4:15 AM.

I wasn’t quite sure what I needed to bring with me other than my phone but since I picked up a FlipBelt at the expo I figured this would be a great day to test it out! I actually ended up stuffing quite a bit of stuff in there…my iPhone, some tissue, some Halls cough drops (I had been fighting a nasty cold for about two weeks now), my ID, and a small amount of cash. I figured whatever water I needed I could get on the course and after the 5K we were headed to the Family Reunion Breakfast as part of our Runners World Challenge package (the Family Reunion Breakfast is pretty much the same thing as the Race Retreat except you only have access to the tent AFTER the race for the 5K, not BEFORE).

When we got to the staging area we really weren’t sure what to do! There was some music going and we saw an area with some picnic tables so we decided to find a seat. The speakers at the expo really emphasized how important it was that you stay off your feet as much as possible during the week if you were doing Goofy or Dopey. The morning of the 5K was probably the chilliest of all the race days. It would have been nice to have a long sleeve shirt or jacket but I wasn’t shivering or anything.

It started to sprinkle a little bit and I regretted not putting the garbage bag I had brought into my FlipBelt. Oh well! We made sure our shoes we tucked under the table so they didn’t get wet. After about 10-15 minutes we started to get antsy and decided to head off toward the corrals.

As we were walking around and looking for our fellow Dopey friends from Michigan we heard the announcer say there were 10,000 participants in the 5K and that included 7,000 Dopeys. So basically, 7 out of 10 runners doing the 5K were wearing a Dopey bib. For some reason I thought that was totally crazy! 7,000 Dopey runners?!? Wow!

Our mohawks seemed to be pretty popular and I was surprised that not a lot of people were wearing costumes. Either that or it was just too dark and I wasn’t seeing clearly.

We found our friends and chatted for a while before we decided it was probably a good time to line-up in our corrals. Typically the 5K isn’t a timed event but if you’re doing Dopey your 5K is timed. I would imagine they do this so there is proof that you actually completed the event! The regular 5K bibs didn’t have timing chips. And if you look at the results from the event you’ll see that only the Dopeys have official times listed for the 5K.

I was in Corral B but we all wanted to do the 5K together so we got in Corral E with our friends. I tell ya, it was CROWDED! I couldn’t even tell you where the corral started and where it ended. I was just glad I didn’t have to worry about my time or anything like that. For the 5K and 10K there were Corrals A-E. The entire AMAZE parking lot was used to hold the corrals for the 5K and 10K, with the starting line located between the AMAZE and IMAGINE lots. It would be interesting to see an aerial view of all those runners!!

It seemed like we spent more time waiting for the 5K to start than participating in the actual race itself! I have a tendency to get VERY stiff in the quads if I have to stand in a corral for too long. Especially if the corral is super-crowded and you can’t move around very much. This is probably the hardest part of any race for me! I typically like to sit down in the corral until they start signing the national anthem and then I don’t have that problem.

The 5K started right on time at 6:15 AM and they let the wheelchairs go and then Corral A shortly after. If I remember correctly they waited 5 minutes in between each corral. It seemed like forever! When each corral started they let off a small set of fireworks from the starting line. It was such a relief to my legs when our corral started moving toward the start line and eventually it was finally our time to go!

Aaaaaaaahhhh….now I can finally move my legs in a forward direction at a somewhat quick pace. Yay!!

The course started off winding through the Epcot parking lot and then eventually spit us out into World Showcase between Norway and China. Prior to that we also got a behind the scenes look at the Test Track ride. Before heading into Epcot we also passed Flik and Princess Atta but I didn’t stop for a photo. For whatever reason I didn’t stop for any characters during the 5 and 10K. Looking back I wish I had stopped for more characters during all the races, but I was still feeling out how the whole process worked! After all, this was my FIRST EVER RunDisney event!!

We got into Epcot and there was DOPEY!! The line was HUGE!! For a split second I thought about stopping but it was still kinda dark and I didn’t think the picture would turn out very well. I hoped we would see him again sometime during the weekend.

The next character I saw in Epcot was Daisy Duck (she was wearing a fancy outfit…from Germany maybe?) and then after that we saw the Ratatouille rats (Remy and Emile). For a brief moment we got more of a back lot tour and then headed back on stage and on our way back to Spaceship Earth and the finish line.

I don’t know if it was because I was in Corral E, the darkness, the excitement of the first race, or what…but the 5K just seemed like complete chaos to me! Not in a bad way per se, but I was completed distracted by so many bright shiny objects! And there was really no rhyme or reason to what everyone was doing…people were chattering,  pictures being taken everywhere, and people going every which way at random rates of speed. I had never experienced anything quite like that before! Oh and KIDS! Lots of KIDS!

I did a lot of speed walking, and then sprinting to get around people in front of me and then walking again. It took everything I had to NOT go full throttle and run the entire thing! My legs had been waiting to do this for a long time.

When there was about 1/4 mile left to go I couldn’t take it anymore and just ran to the finish line. And just like that…the 5K was done!

You can see my Garmin activity and detailed map here:
http://connect.garmin.com/activity/433619572

Here is a character list summary as best as I can remember:

We got our 5K “medal”, ate way too much at the Family Reunion Breakfast tent, and then got our picture taken with the Monsters, Inc. gang and then Donald and Mickey.

We didn’t realize that the buses picked us up right inside the staging area. OOPS!! (not sure how we missed that because buses are like…HUGE). So we ended up walking back to the bus transportation area at the Epcot entrance. Luckily we discovered this in time for the half and full marathon so we only ended up making that mistake twice.

Once we got back to the room I showered, took a nap, ate a snack (I was still full from breakfast) and then headed back out to the expo to take one last look at what they had to offer and explored the Wide World of Sports complex a little bit more. After that I met up with my friend at Pasta in the Park at Epcot where we stuffed our faces some more, got our faces painted, had our picture taken with Dopey, and then headed back to the resort so we could go to bed!