I hear from women all the time that they’re afraid to do P90X because it will make them BULKY. REALLY? Do I look bulky? 🙂

Once again, the mainstream media has failed us. Ladies, please stop reading magazines like SHAPE, FITNESS, and SELF. And PLEASE stopping using words like SCULPT, SHAPE, and TONE. Because when it comes to muscles, those words don’t mean anything (we’ll tackle that topic in an upcoming post). Seriously, who cares about getting TONED?? I wanna get STRONG!!

The people who sell fitness products know that women don’t want to get BULKY. One of the P90X workout plans is even called LEAN. But I think all this talk of LEAN is sending women mixed messages.

Do you REALLY want to change your body or not? Do you want to burn more fat and calories? Guess what, that’s not gonna happen with more hours on the treadmill or the elliptical machine. You need MUSCLES for that! And what builds muscle? Strength training!!

I always ask people what plan they’re going to follow when they do P90X and 99% of the women I talk to respond with LEAN. When I ask them why, they say, “Because I’m afraid CLASSIC is going to make me too bulky.” Nooooooooo! I almost wish Beachbody had left LEAN out altogether.

If you’re a woman on the fence with P90X, or even on the fence about doing the CLASSIC plan, just DO IT. It’s only 90 DAYS!! Do you REALLY think you’re going to look at yourself in the mirror 90 days from now and say, “Gee, that was a bad decision!” Stop kidding yourself!

For my first round of P90X I followed the CLASSIC plan during Rounds 1 and 2, and then did DOUBLES during Round 3. Yeah, I really regret THAT decision!

I don’t claim to be a fitness expert and I know one personal experience may not be enough to convince you, so here’s some additional information from people who DO claim to be experts….

From Burn the Fat (Tom Venuto):

Judging by how often I hear concerns about getting “too big,” it’s obvious that many people think building muscle mass is easy. Believe me, gaining muscle is far from easy. It’s a long, difficult process for everyone except the most genetically gifted. It’s even more difficult for women, who have less of the muscle-building hormone, testosterone. Despite my reassurance, almost 100% of the women I’ve coached (and some of the men) have still been worried about getting big “bulky” muscles. If this is a concern for you, let me put you at ease…

Unless you’re a “genetic freak” with a high mesomorph component, you’re not going to get too big from weight training. You’re also not going to wake up one morning and notice that you’ve sprouted massive bulk overnight. The process takes place slowly, and you’re totally in control of how you want your body to look. If you ever reach the point where you have all the muscle you want, it’s very easy to change your training and nutrition to maintenance.

From You Are Your Own Gym (Mark Lauren):

“A common misperception is that women will get bulky from strength training. They won’t. Not unless they start popping pills and sticking needles in ther buttocks.

There is no reason to train differently based purely on your sex. Both sexes gain and lose muscle and fat the same way…It’s virtually impossible that a woman would get bulky, muscular arms from doing upper body exercises. Even most steroid-saturated professional bodybuilders don’t have huge upper bodies. Some women continually fail to understand that if they exercised their upper bodies as much as their lower, their tummies would just be that much flatter, and their glutes that much tighter, because they would be increasing their overall lean muscle mass. Again, building and maintaining muscle, alone, is the most effective way to burn fat and calories.”

If anything, it’s an insult to all those people who’ve spent years in the gym to look the way they do. It didn’t happen overnight, which is what you’re assuming by saying something so absurd.

And let’s be honest, most people (men and women) won’t work hard enough to get “big and bulky” in the first place. It’s hard enough for a man to put on any significant amount of muscle, let alone a woman. Women are physiologically at a disadvantage for putting on muscle due to the fact that they have ten times less free Testosterone in their bodies compared to men.”

From The New Rules of Lifting for Women (Lou Schuler):

“I’ll say this as simply as I can: Unless you’re an extreme genetic outlier, you can’t get too bulky. Your body won’t allow it…The most likely outcome, assuming you’re willing to work hard, is that you’ll come away with a small net loss in body weight, but a dramatic difference in the way your body looks in the mirror and the way your clothes fit…What you don’t have to worry about is getting too big.”

From Secrets to a Healthy Metabolism (Maria Emmerich):

“Women don’t have the amount of testosterone required to build huge muscles. In fact, even men struggle to gain muscle which is one reason steroids are so popular with men who want to build big muscles.

Lifting heavy weights can benefit both men and women and, in fact, challenging your body with heavy weights is the only way you’ll really see results and get stronger. I’ve been lifting heavy weights for years and have never even come close to looking like a bodybuilder; most women who lift weights would agree. Remember, muscle takes up less space than fat. When you add muscle, that helps you lose fat (along with your cardio and healthy diet, of course), which means you’ll be leaner and more defined.”

Oh, and BTW, if you want to read a women’s fitness magazine that’s halfway decent, try something like Oxygen or Muscle and Fitness Hers. Granted, you have to be careful about some of the information you’ll read in these magazines too, but they’re much better than the alternatives!

Are you a woman interested in doing P90X and want me to be your coach? Purchase through this link or sign-up for a free Team Beachbody account. 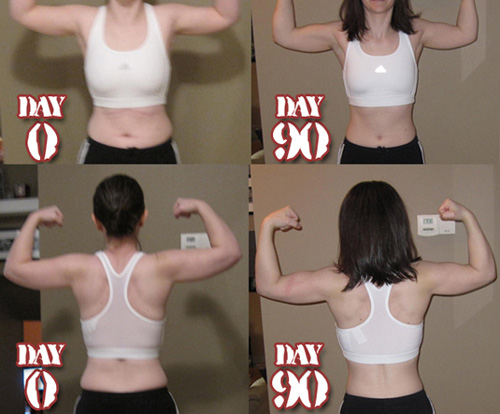