If you’re anything like me you probably get a bunch of emails from family and friends with cute pet photos attached. I received this photo with a bunch of others not too long ago. At first I was amazed but it didn’t take me long to realize that this photo is fake. There’s some kitty cloning going on around here–and not the kind that involves DNA! 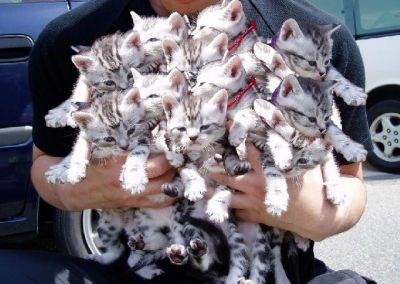 My first clue was that it would be nearly impossible for one person to hold THAT many kittens! Also, when you study the photo a little closer, it’s fairly obvious that some touch-up work has been done. In the photo below I’ve marked the kittens with different colored dots that each match their respective “clones.” I think I count seven kittens. Still pretty impressive though. They really didn’t have to go through all that trouble. 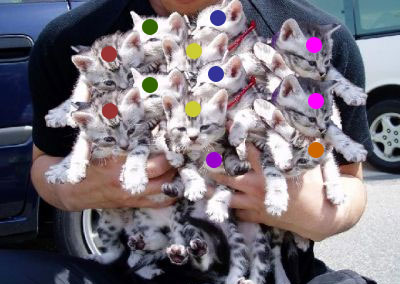 Anyway, this isn’t anything too serious and was probably all done in fun. However, not everyone trying to pull the wool over your eyes is doing so for pure entertainment.

Not everything is what it seems to be at first glance. Especially in the world of blogging, internet marketing and schmoozy sales pitches. You really have to take the time to look below the surface. We often go through life in a hurry and don’t take the time to investigate things as much as we should. We think we’re saving time but in the end our poor judgment ends up costing us a lot.

So next time you read or see something that makes you say, “Wowza!” just remember the cloned Photoshop kittens. Don’t get duped!