Have you ever seen the documentary film Forks Over Knives? It focuses on food vs. health and how making the transition to a plant-based diet can have a HUGE effect on our body, even more so than medicine. I know you’ve heard the quote: LET FOOD BE THY MEDICINE. That’s how I would describe Forks Over Knives in a nutshell. Interesting stats and studies were shared that demonstrated the growing popularity of sugary, fatty and processed foods that people are eating around the globe and how this is affecting our standard of living. Pretty scary stuff! 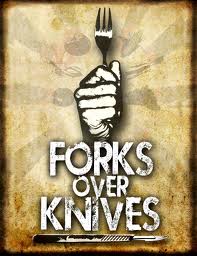 During the film real people are shown who change their eating habits when they find out their lives are in danger and are able to reverse disease and get rid of expensive and potential dangerous prescription medications. One story I found particularly disturbing was when a woman with diabetes was able to reverse the course of the disease and when she asked her doctor if she should continue taking medications her doctor seemed almost disappointed with her progress!

One of my favorite lines from the film came from Dr. Caldwell Esselstyn who is a heart surgeon at the Clevland Clinc. He says, “Some people think the ‘plant-based, whole foods diet’ is extreme. Half a million people a year will have their chests opened up and a vein taken from their leg and sewn onto their coronary artery. Some people would call that extreme.”

Sort of puts things into perspective doesn’t it?

Something else the film emphasized was how we have more or less been brainwashed into thinking that only meat and dairy products can give our bodies the protein and other nutrients we need to build and maintain muscle. I found this particularly interesting since this has been a topic I’ve been thinking about quite frequently since I finished the Beachbody Ultimate Reset a couple months ago.

In fact, it brought to mind Mike French, a fellow Beachbody coach who completed the BUR with his wife in June. On his Facebook page he writes:

Before my Tami asked me to do the Ultimate Reset with her, I was rock solid AGAINST eating vegetarian in any way shape or form. I was a MEAT guy and I have been since childhood. Very simply, I was dead set against vegetarianism because to build muscle and be healthy, I NEED to eat meat! I said on several occasions that it’s “unnatural” not to eat meat.

Tami and I completed the 21 days of our 1st ever Ultimate Reset this past Tuesday. My eyes and mind have been OPENED! I am very honestly, a changed man. I have NEVER felt better, slept better, had less gas (TMI, I know!), and had more even energy ALL day long. I just feel GOOD! I understand WELLNESS 100% now. As far as my stance on meat, I was flat out wrong! My Ultimate Reset experience has awakened me to what REAL healthy nutrition is.

I have not lost an ounce of muscle while doing the UR too!…The final and most AMAZING thing is that my POST Ultimate Reset blood cholesterol panel came back today.

My total cholesterol dropped 101 points in 21 days with no cholesterol reducing drugs or exercise!

How COOL is that! This is a direct result of the POWER of whole food, plant based nutrition!”

MMA fighter Mac Danzig was one of the extreme-athletes that was featured in the film as an example that you can build and maintain muscle on a plant-based diet. If you do some searching online you can find MANY others including triathlete Brendan Brazier, whose trio of THRIVE books I will be purchasing very soon! I know many of us associate the word “vegan” with small and scrawny but that is often not the case at all!

It’s important to keep in mind that VEGAN does not always equal HEALTHY. You really have to know what you’re doing! But now that I’ve been done with the Reset for almost two months I can feel myself slowly falling back into my bad habits. I’m bargaining on behalf of some of my old favorite foods and they are working their way back into my routine and soon I’ll be right back where I started!

During these next couple of months I plan on doing quite a bit of research and will be starting a fun project on October 1st. I don’t want to spill the beans (pun intended!) just yet, but stay tuned for more information on that!

But to give you just a hint, here’s a few books that I put on hold at my library and/or plan on ordering on Amazon very soon:

If you haven’t seen it already, I highly recommend you checkout Forks Over Knives as well as Food, Inc. And what do you think? Have you ever considered trying a plant-based diet just to see what it would be like? Feel free to share your thoughts in the comments section below!