EUREKA! I had a major epiphany recently while reading the book Your First Year in Network Marketing by Mark Yarnell and his wife Rene. I love it when I come across something in a book that makes me so excited that I can’t wait to share it with everyone else. Actually, that’s pretty ironic…because that EXACT thought process has A LOT to do with the #1 secret to creating a successful Beachbody business.

Near the end of the book Pat Hintze and Steve Schulz, partners in their network marketing business, tell how they discovered the REAL secret to MLM success. (I’ve underlined some areas to emphasize key points) 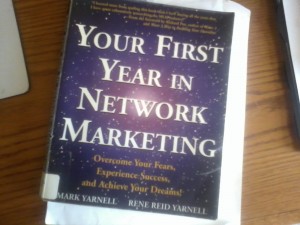 “Our story is definitely not one of overnight success. The truth is we have simply outlasted most of the others in this industry. For three and a half years, we worked this business with so little results it’s almost embarrassing to discuss. We went through every possible negative human emotion. We asked ourselves repeatedly, ‘Why won’t this work? What are we doing wrong? Why is everyone growing faster and bigger than we are? Will this ever really work for us?’

“We went to every rally, every function possible. But even those seemed to be more depressing than exciting because all we ever heard were the tremendous stories of success about other people. Just once, we would have loved someone to stand up and say, ‘I drove three hours last night and got stood up!’ Now that would have made us feel great! (If there is one thing we have learned about this business it’s how easy it is to put yourself down. Just compare your success to the success of others. There will always be others who are experiencing more success than you are at any given time.) But we kept going because we thought we might find ‘the secret’ to the business.

“We lasted long enough to do just that. We traveled eight and a half hours to a rally intent on finding ‘the secret’. We knew that the top money earner in the company was going to be there. We got there early so we could find out from him the key to making this business work. We found him and started asking a barrage of questions: How do you do this? How did you make it work? What is the secret? His answer was a bit surprising.

“The law of large numbers will rescue the persistent. We kept trying long enough to eventually find others to whom we could give it–people who knew what they were doing. They were actually making their organizations grow. We got excited and started exalting them, telling everyone about their success. Then they found others to give it to, who started having more success than they were. Incredible! We started pointing to their success and others got inspired by what they were seeing. Over the last three and a half years, all we have managed to do is stumble across a few others to whom we have given this opportunity and they were able to do the same.

“Today, we have thousands of people across the country trying to give this business away as a gift to others. Oh, we get the chance to stand up in front of many people and take credit for it, but really…we didn’t do it!” Steve is a former teacher and Pat is a former sales rep for a paper company. Today, after seven years, they are among the very top income earners in their company–we are talking millions and million of dollars a year! During the early years before it all started working for them, though they never seriously considered quitting, they developed a philosophy about starting over that they explain in this way: “Even today, we continue the practice of starting over again as if we had no one in our downline. It helps us stay focused on what really makes this business work: persistence. The one thing we’ve learned is that failure cannot handle persistence.”

So there you have it! The #1 Secret to Success as a Beachbody coach: Be persistent in finding people that you can simply give the business to.

For some reason I never really thought about this business as a GIFT that you give to someone else. But when you think about it that way, it really makes sense! Only by giving this business to others will you ultimately receive huge rewards in the remarkable world of being a Beachbody coach. And be sure to exalt others instead of yourself. Pat and Steve’s story accurately describes the REAL nature of our industry versus so many you may have heard about “pyramid schemes.”

I hope you’ll enjoy sharing their story as much as I have! 🙂