I decided to book our room at Art of Animation for the Dopey Challenge at Disney World’s Marathon Weekend 2014. This would be my second trip to Disney World. I had previously visited Disney World in March 2013 during the Beachbody Success Club Trip. Beachbody reserved our rooms at the Beach Club for that trip, so needless to say I was pretty spoiled during my first visit to Disney World! 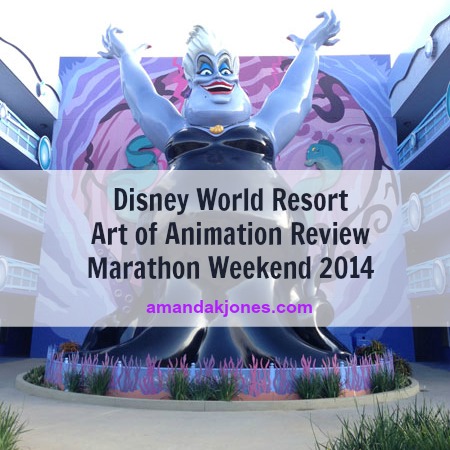 Room rates at Disney go up and down depending on the season. Obviously, rates are higher during the most popular times of the year. We stayed in a Little Mermaid Standard Room, which included two Double beds (or one King). As I write this article, these rooms go for as little as $105 per night or as much as $197 per night (not including tax). There are also suites available which include sleeping arrangements for more people as well as a kitchenette.

Since it was only me and my running buddy, we didn’t need a lot of space or amenities. We also figured it would be easy enough to live off whatever food we would receive before and after the races as part of the package we signed up for through Runners World. For that reason we decided not to worry about a kitchenette. This weekend was all about running and surviving the Dopey Challenge, so we wanted to keep things as economical as possible.

Now, I’ve learned A LOT about Disney and planning trips since last year!! When I booked our room in July 2013 I was still pretty clueless! Sure, that was only 7 months ago, but still…

I decided on Art of Animation (AoA) because I wanted to keep things economical but at the same time I really didn’t want to stay at All-Star Resorts. I read on several travel websites that the standard rooms at AoA were a much better value compared to other “value” resorts. I also knew that AoA was fairly new (built in 2012) and I had heard good things about the food court.

I didn’t know there was any other option to book a resort other than through Disney directly, so I got on the RunDisney website to see if I could book a room. When I did that, everything I pulled up told me that AoA was FULL, so I ended up calling 407-939-iRun and was able to book over the phone with no problems. I guess July is a long time to wait before booking your run for marathon weekend, but I didn’t know any better!

I was required to make a deposit over the phone and then I needed to pay the entire balance at least 45 days before our check-in date. I ended up paying $674.96 for 5 nights, so that works out to about $135 per night, including taxes. I believe I got a discount because I was participating in marathon weekend, but I can’t say 100%. Like I said, I know more about this stuff now then I did back then! With a little bit more research, planning, and homework I probably could have stayed in a nicer resort for that price, but even so…I was very pleased with our stay at AoA and I would definitely stay there again!

When you walk in the lobby there is a huge wall of character sketches from Finding Nemo, The Lion King, The Little Mermaid, and Cars (one movie for each building theme at the resort). The first thought that came to my mind when I walked inside was, “Wow….COLOR!!” 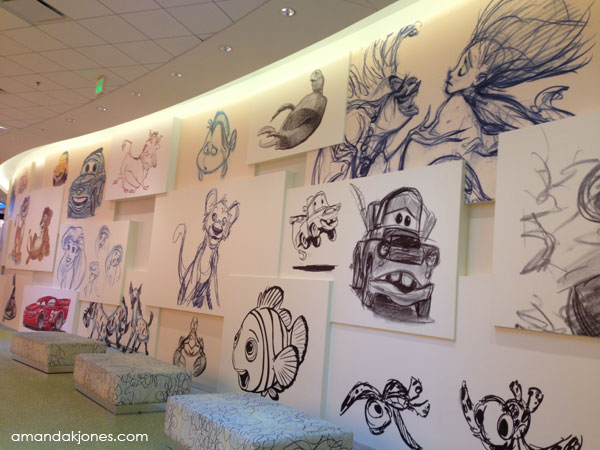 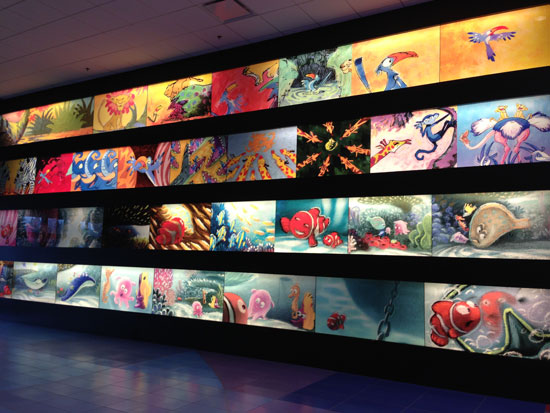 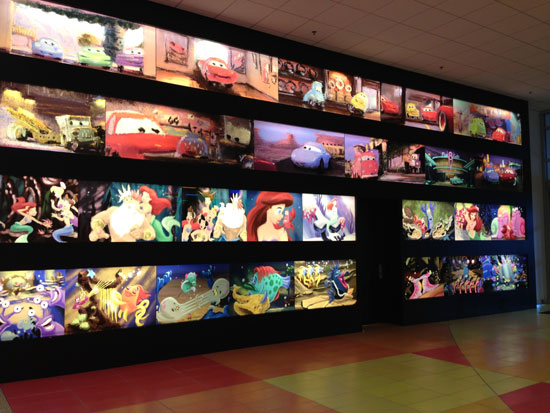 Adjacent to the lobby is a hallway filled with colorful scenes from the same Disney movies. This building is called Animation Hall and is the main gathering area for the resort. It includes the main desk where you check in and out, gift shop, and the food court.

We only ended up eating in the food court one time but there are A LOT of choices when you go there. I’m not 100% sure how it works but it seems like they rotate the menu depending on whether it’s breakfast, lunch, or dinner. It’s sort of like a cafeteria style but everything is made to order.

The Disney Food Blog has a great overview of what you can expect to find at the Art of Animation Food Court, so if you’re considering a stay there you might want to check it out.

Our first day there I got a chicken burger that was a little on the spicy side but quite tasty. The cole slaw was a little bland but not too bad. I almost wish we had a chance to eat more meals there so I could explore the different options, but between all the races and our other pre-paid meals we just didn’t have a chance!

We stayed in building #9 which was a little bit of a walk from Animation Hall and the bus transportation but it wasn’t too bad. We enjoyed walking through the resort to get to our building as well as walking outside on the sidewalk to avoid the crowds. It seemed like pretty much the same distance either way. If you’d like a shorter walk and still want to stay in the more economical standard rooms, you could request to stay in Building #7 when you reserve your room or check-in and you might get lucky.

I think our room was perfect for two adults but I think it would be a pretty tight fit for four adults. Of course, if you don’t plan on staying in your room for a long time it’s probably not a big deal. For marathon weekend it would probably work, as long as everyone doesn’t need to take a shower at the same time.

One thing I liked about the room was that there was a separate changing area you could close off and keep private with a curtain that was adjacent to the bathroom. I could see that being useful if you have multiple adults sharing the room since it gives you some additional private space in an otherwise tiny room. Maybe I haven’t done enough traveling yet, but I’ve never seen that in a hotel room before.

As you can see from the photos the entrance to our room was located outside, sort of like what you’d find at a Red Roof Inn. I think this is pretty typical of the value resorts at Disney. However, at AoA this is only the case for the standard rooms.

I’m learning to take more pictures for my blog reviews 🙂 but YourFirstVisit.net provides a great review of the Little Mermaid rooms including lots of pictures and floor plans.

The thing that surprised me about the room was that it didn’t have a coffee maker. It didn’t really matter to us, but I suppose if you really needed to have one you could ask the front desk. The frig was quite large and kept our milk, water, and Powerade nice and chilly. No microwave–but again, this is something you might be able to get if you make a special request. I also thought it was nice that our area of the complex (3 buildings) had it’s own pool. We went there after the half and full marathons to soak our legs in the chilly water (our version of an ice bath). We didn’t know that we needed to bring our own towels from the room, so we just grabbed a couple from a nearby cast member who was cleaning rooms. 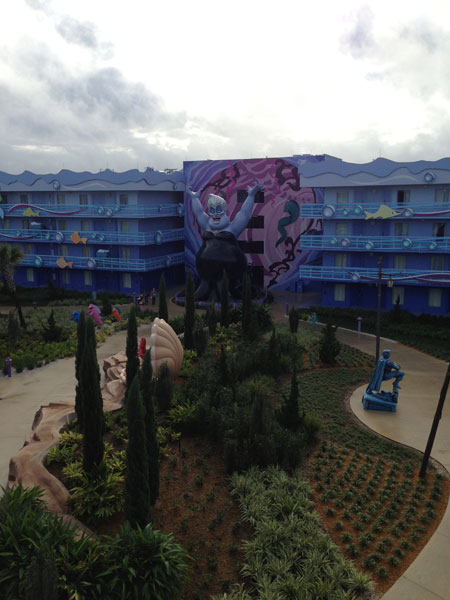 We stayed on the top (fourth) floor and didn’t have any problems with noise. The cast member who checked us in asked if we wanted a courtyard view (yes) and also gave us the option of the second or fourth floor. We liked the close proximity to the expo at the Wide World of Sports complex. It made for a very short bus ride. We also had no problems using the “special event” buses to get to and from the races. It was probably a 10 minute ride from the resort to Epcot. The regular bus transportation to and from the parks and Downtown Disney was always crowded and a bit of a wait, but I suppose that’s the norm for pretty much any Disney resort that only has bus transportation. 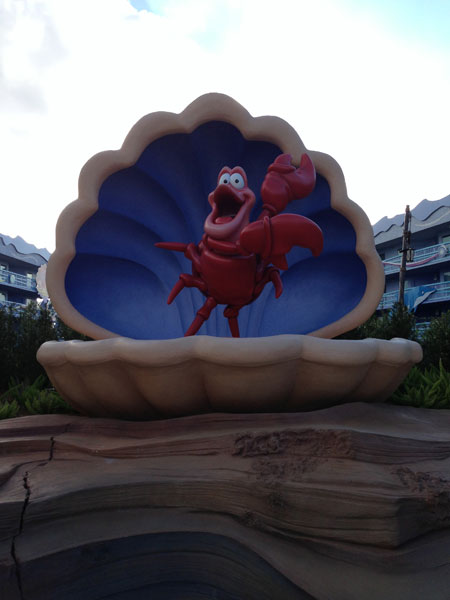 So here’s a quick overview of the pros and cons of staying at Art of Animation during Marathon Weekend at Disney World:

— Very affordable. A lot of people say that of all the “value” resorts at Disney AoA provides the most VALUE for the money you spend. After staying at AoA I couldn’t see myself staying at All-Star Resorts unless AoA was booked and I was really pinching my pennies.
— Large food court with lots of choices.
— Close proximity to expo.
— Ideal room size for 1 or 2 people.
— The themes of the buildings and room decorations definitely gives you the feeling that you’re at Disney World!

I would definitely consider staying at AoA again, whether it was during marathon weekend or any other time!

Do you have a favorite resort at Disney World?